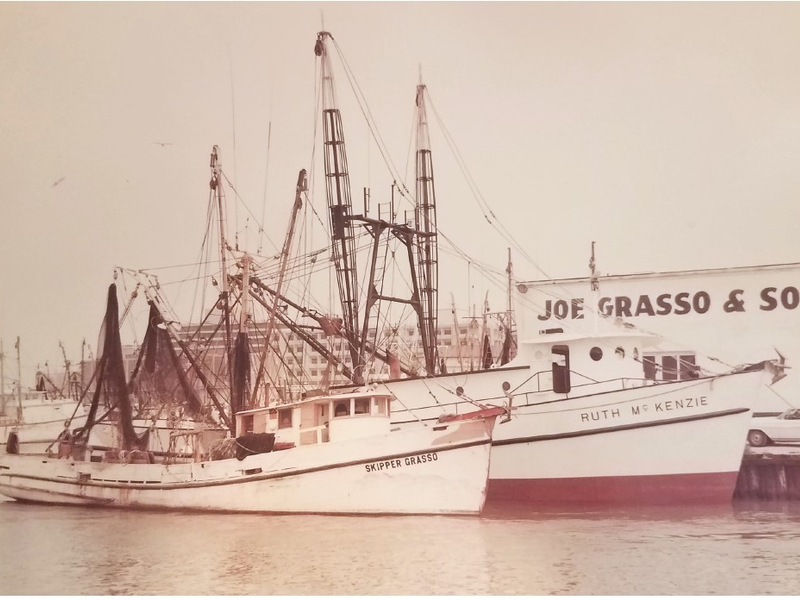 At one time, a father and son duo sold the common shrimp and masterfully created an empire, claiming their own place in Galveston history. This is the story of Joseph Grasso and Son, one of Galveston’s largely forgotten success stories.

A yellowed newspaper clipping from the 1950s shows Joseph Grasso Jr. kneeling next to two brown pelicans. The story explains the odd picture - Grasso had been chosen by the Texas governor to procure some wild pelicans for Buckingham Palace at the request of Her Majesty, the Queen of England.

Such was the celebrity of businessman Joe Grasso Jr. in the latter years of his life. A friend of politicians and the media as well as an extraordinary businessman, Joseph Grasso Jr. was only the second act of a greater father and son story. It did not begin with high-powered friends of influence, but as the survival story of a humble immigrant, Joseph Grasso senior, who just wanted to sell shrimp.

In the years following the great storm of 1900, Galveston tenaciously rebuilt, and then it reemerged with a new look and a slightly different complexion. New people arrived to fill the void of those lost to the disastrous storm. Exotic new names and faces arrived from places like Greece, Italy, Serbia, and other southern European lands. With them, they brought to the island their unique cultural distinctions. 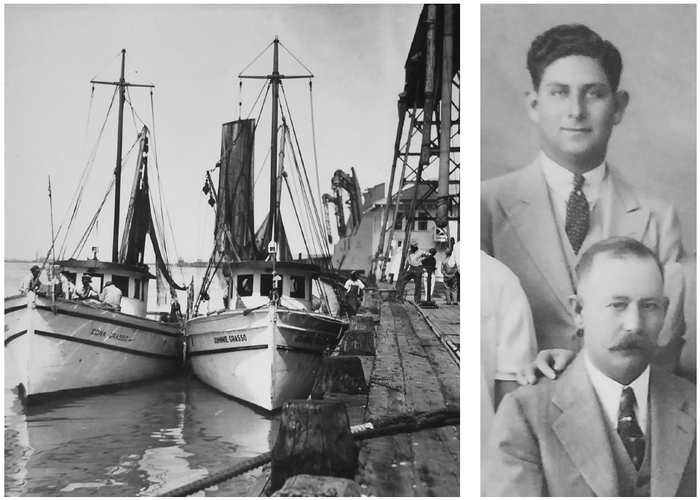 In 1906, Joseph Grasso emigrated from Italy at just 23 years of age. He arrived with little money and few skills. Soon he found himself amid a simmering melting pot of fresh immigrants, all in the same struggle of surviving in this unfamiliar land through whatever hopeful means possible. In Galveston in the 1900s, often this meant laboring on the wharves as a longshoreman or working the bays as a fisherman's hand. This is where young Grasso landed.

After saving a little money, he returned to Sicily, married his childhood sweetheart and brought her back to Galveston. After a few years of continuing to patiently save money, he was able to buy a small fishing boat. It was named the Lena and it was his very own. The Lena set him free, he no longer needed to work for anyone else, and from here forward he was in control of his own destiny.

The years went by and he worked his small boat in Galveston Bay as did many other fishermen. But Grasso was different from the others; he would never be satisfied with just the day's catch. Over time, he was able to buy a fishing schooner through which he could greatly increase his catch.

His ambitions were real, he allowed there to be no obstacles, only solutions. He soon bought an old barge which he docked at Pier 20. For years it would serve as a make-shift storefront for his growing shrimp business.

His business continued steadily, and Grasso boldly invested in a modern, motorized trawler, equipped with a specialized shrimp trawling net. This was revolutionary for Galveston in the early 1920s. It was a new era, as prior to this fishing had been done using sailing boats.

This boat, designed specifically for catching shrimp, was a big purchase and something of a gamble as demand for shrimp was limited, and it was generally sold only as bait. In the early 20th century, most Americans did not eat shrimp. They were comfortable eating beef, pork, or chicken, but shrimp was considered an insect-like bottom dweller.

On the other hand, Grasso and his fellow Mediterranean immigrants were culturally attuned to eating shrimp or at least its cousin the prawn. No doubt he must have realized the untapped market potential for this underappreciated resource, but just not in Galveston.

In 1922, Grasso began to brainstorm on ways to capitalize on the abundance of shrimp - the mind behind the imposing Sicilian mustache was now plotting to do something extraordinary. 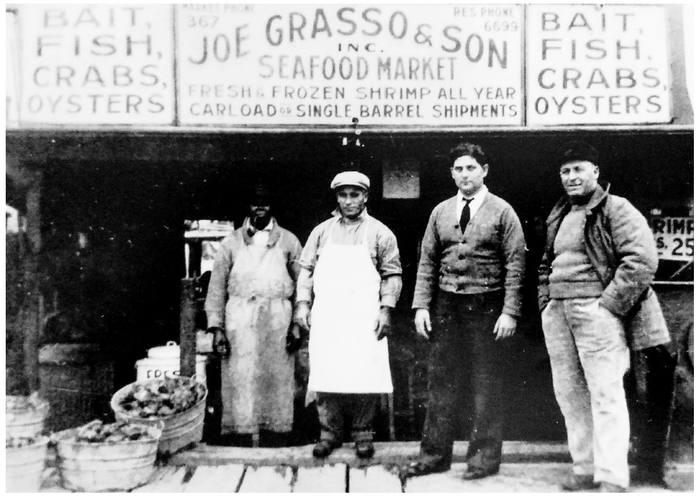 With the partnership of another Galveston business, the Galveston Ice and Cold Storage Company, Grasso boldly commandeered some of the most cutting-edged technology of the time - blast freezing. Blast freezing, which safely preserves consumable product for shipping, had never been used in the Texas seafood industry, but Grasso was willing to give it a try.

More importantly, he now had a major buyer. He had connected with a Japanese exporter, and through careful planning between the parties, he would be able sell his catch to the Japanese who were eagerly waiting to enjoy exotic Texas shrimp. Best of all, he was no longer confined to selling his catch to the local clientele.

The plan was executed expertly. While the other fishermen were selling small amounts of shrimp from old wooden barrels, Grasso was now shipping out thousands of pounds of Galveston shrimp to a market halfway around the world.

He would ship his shrimp in stylishly modern waxed cartons, precisely 20 pounds each, each box proudly emblazoned with a lithographed “Grasso” label to be seen around the world. Grasso dared to enter the realm of 20th century modern technology to become an international exporter and made history in Galveston.

As the years went by, his shrimp export business prospered. His fleet of motorized shrimp trawlers grew, and he would buy catch from independent fishermen as well. There seemed to be no end to his steady success exporting shrimp, nothing was stopping him.

He became a popular man about town, and as well, a loved pillar of the Italian immigrant community in Galveston. He hosted and gave guidance to countless Italian Immigrants and was always active in Italian American organizations.

Joseph Grasso, the man with a big heart and bigger dreams, died in 1936. He was given an extended eulogy by Senator T.J. Holbrook, but his loss was not the end. Destiny would move his legacy forward, because through many of the years spent building his business, his loyal first son Joseph Junior had been close by his side.

As other young boys lived ordinary lives at play, Junior was not ordinary. He grew up on the wharves and was always content working with his father and doing errands. He demonstrated a love for the harbor with all its ships and boats and was consequently learning his father’s principals. At 21 years old, the company was now in Junior's hands.

The years passed, and by the late 1940s, shrimp was becoming increasingly popular with Americans. Now shrimping fever had fully taken hold, and a new gold rush was raging.

Unsurprisingly, the old city wharf at Pier 20 was also becoming increasingly crowded with new shrimp trawlers. The moment was never more critical that Junior thrust his company forward and move ahead of the crowd, not unlike what his father had done. 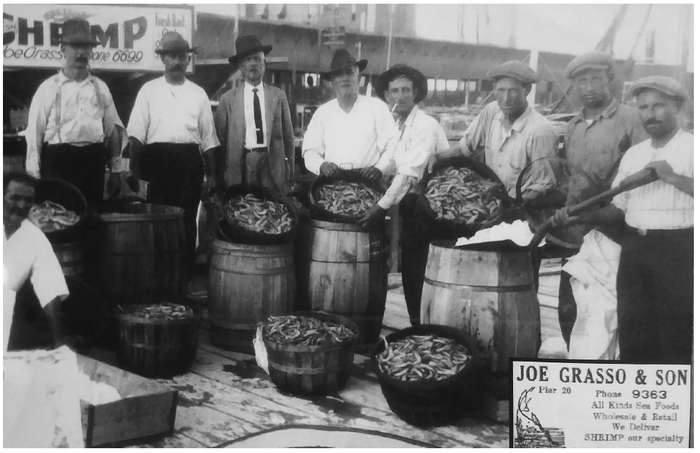 He began to brainstorm a greater vision for the future of his company. Amid the swirl of cigar smoke rising above his thoughts, he came up with a plan, one in which he would execute masterfully. He would soon leave Pier 20, build a grand new headquarters building at the Eighth Street Pier, and create a dream far beyond anything his father could ever have imagined.

The forlorn, barnacle encrusted old barge of his father's dream was now but a distant faded memory. Joseph Grasso and Son moved their headquarters to a spacious new building. The upper floor housed “ultra-modern” administrative offices - the brains of production - while the ground floor was the beating heart which included a modern processing plant. Within it, shrimp was inspected, graded, processed, and packaged.

Next to the new headquarters building was a freshly dredged and sheltered harbor where Junior built nearly a quarter mile of modern docks. His fleet had grown to an impressive 33 boats, many of which were giants used for trawling in the Gulf of Mexico. Meanwhile, the Galveston Ice and Cold Storage Company could barely keep up with the volume, as Grasso was shipping to major cities throughout the United States.

The company was quickly outgrowing Galveston. By the 1960s, demand for the now popular breaded shrimp necessitated an enormous new processing plant which was built in McAllen, Texas. This plant was supplied by shrimp trawler fleets at nearby Port Isabel and Brownsville, with shrimp harvested from the Bay of Campeche. It was 32,000 square feet, had its own blast freezing tunnel, and could store up to 1,300,000 pounds of packaged shrimp.

The shrimping boom hit its peak in the late 1960s, and soon after, those in the business began to feel the strain of a demand that had inevitably plateaued. But as any brilliant businessman would do, Junior was always seeking out new opportunities.

By the early 1970s, he had started two new corporations in the lucrative offshore oil drilling services field and then left the seafood business completely. Joseph Grasso Jr. passed away in 1975.

Today, the Pier 20 mosquito fleet is surrounded by fine restaurants serving shrimp in so many delectable ways, but it is worth it to visit those docks before the break of dawn. In the quiet of the moment, with the hypnotic lapping of water on the weathered bulkheads, one can almost smell the scent of cigar smoke from so many memories ago, at the very place where it all began