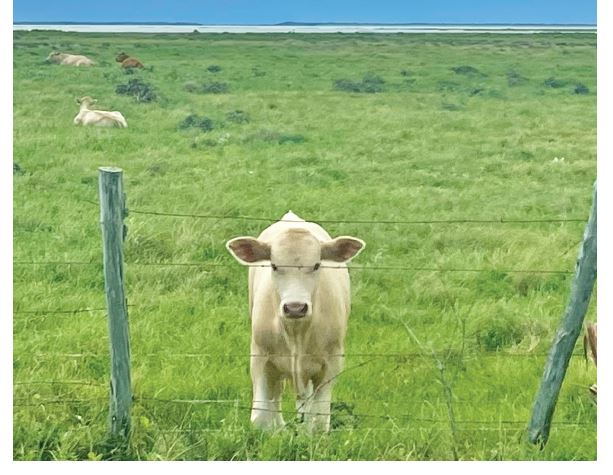 Whether you are a visitor to the Island for the first time or twentieth time, or a local who has lived on Galveston Island since birth, here at Galveston Monthly one of our favorite things to do is to help everyone get to know the Island a little better.

So that is why, among other reasons, we do what we do--to show all of our readers a side of the Island they may have never seen, and to introduce you to the array of colorful characters who embody "the spirit of the Island."

The photo is just one small example of something unique on the Island that we get to share with you. It is titled "Curious Cow" and was taken by Luke Mazur.

The image is more than just a cow standing in front of a fence. Luke took the picture on the west end of the Island where cattle are more prevalent and it's not that uncommon to see a herd grazing in some of the still undeveloped parcels of land.

If you look behind the cow you can see Galveston Bay and beyond that you can see tall grassy berms that were created when the Intercoastal Waterway (ICW) channel was originally dredged.

I'm a big fan of Galveston history and here is a bit you may not know concerning the ICW. During World War II, the need for efficient transportation of bulk materials within the continental United States was well demonstrated after German submarines sank numerous merchant ships off the East Coast. By 1942, the 9ft by 100ft ICW channel was completed between New Orleans and Corpus Christi. The channel was eventually extended to Brownsiville and completed in June 1949.

Our cover this month is a painting titled "Duces" by Galveston artist Rene Wiley. Rene is a talented artists who has her works featured at Rene Wiley Gallery located in Galveston at 2128 Postoffice. If you have the opportunity, stop by her gallery to view her works. You can also meet her during the nect ArtWalk on Saturday, August 27.

Until next month, enjoy the Island!