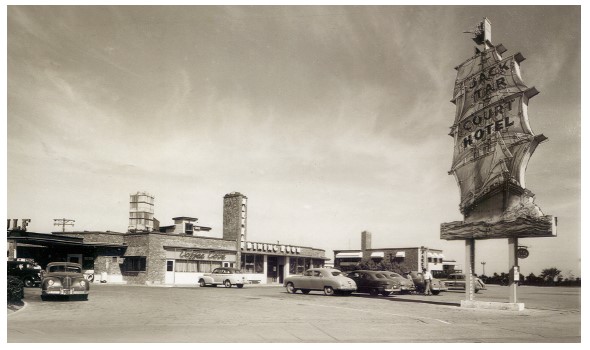 When World War II ended in 1945, Americans enjoyed an unprecedented period of economic prosperity. With memories of the Great Depression and the war still fresh in the minds of many, Americans finally had a surplus of goods from which to choose, and money in their pockets with which to buy them. In Galveston, young people flocked to the movies to see their favorite screen idols. Life was good, and the much-anticipated movie premieres of that golden era of Hollywood did not disappoint.

People lined up outside the theaters to see the newest moving pictures featuring the shimmering Rita Hayworth, the amazing dance sequences of Gene Kelly, and the synchronized swimming “aquamusical” performances of Esther Williams. Like the rest of the country, Galvestonians dreamed of lounging luxuriously by a magnificent pool, basking in the sun, wearing nothing but the perfect bathing suit, a dark suntan, and a big smile. Whether or not W.L. Moody III, son of Galveston’s legendary cotton magnate and chairman of Affiliated National Hotels, ever paid attention to Esther Williams’ movies remains unknown, but in 1939 he acquired two parcels of land at the intersection of Seawall, 6th Street and Broadway for the purpose of building a motor court that would be named the Jack Tar. Anchoring the project which was completed in 1940, were a main office, gas station, and drive-in restaurant. The 83 rental units were housed in three long, jagged bars overlooking Stewart Beach and the Gulf of Mexico. It enjoyed reasonable success, and then in 1949, when the economic surge enabled people to travel more, W.L. Moody III decided to invest in a hundred-thousand-dollar makeover that put air-conditioning in all rooms, renovated the grill, and added the 24-hour “Coffee Cove.”

In 1952, Charles Sammons, a Dallas insurance magnate and frequent visitor to the Galveston court, bought the property along with the rights to the name “Jack Tar.” Sammons decided to build a million-dollar state-of-the art expansion that included the addition of a grand pool with a terrace and an idyllic landscape. It became an ultramodern resort hotel and the first of its kind in Texas. The slogans were “Prepare to be Pampered” and “The Ultimate in Fine Living.”

This new highly ambitious concept played into the imagination of Americans and Islanders who loved the idea of living a Hollywood-glam lifestyle. “The idea of this luxurious pool with the surrounding multi-level terrace and the gorgeous landscaping attracted people,” says Guy Carwile, a professor of architecture at Louisiana Tech University who has researched and written on the history of the Jack Tar Hotel. “W.L. Moody had hired a man named Ed Leach, back when the Jack Tar was still just a motor court. Leach was a bouncer at Sui Jen, which later became the Balinese Room, and he had exposure to that glamorous lifestyle by meeting some of the big Hollywood stars that performed there. W.L. Moody hit on the idea that if you linked swimming pools and Hollywood, you’d feel kind of like a millionaire, even if you really weren’t.” Carwile explains that the pool at the Jack Tar Hotel had been extraordinarily large for a reason. “It was so large, it would have been beyond the means of most people to own,” he says. “The size of the pool was just one of many subtle ways the hotel tried to tie into the millionaire’s lifestyle. You may not actually be one, but you can certainly lounge by a pool the way they do.” He adds that the pool, which had been designed by architect Thomas M. Price and built by Paddock Pools of California, was a free-form pool surrounded by multi-layered surfaces. “The pool was inwardly focused, away and separate from the beach, which of course was right in front of the hotel,” he explains. “It gave the pool and the hotel a very subtle sense of exclusivity. You did not have to associate or even be seen by the people on the beach. It was all part of that high-roller lifestyle.” Rita Hayworth and Esther Williams continued to be two of the reigning Hollywood golden girls of their time, and in Galveston the Jack Tar Hotel was also enjoying a golden age of sorts, between 1954 and 1968. It was said that Ed Leach’s connections to the Balinese Room brought wealthy and famous clients like George Burns and Frank Sinatra over to the restaurant and bar at the Jack Tar Hotel. The moneyed oil folks from Texas often came to stay, and there were suites named after those people. Those who enjoyed the pampered, poolside lifestyle could purchase a membership to the hotel’s Quarterdeck Club, which gave access to the pool and club facilities, private dressing areas, and the Quarterdeck restaurant and bar.

But in 1957, the Texas Rangers finally closed down the Balinese Room, although many had believed that gambling had been good for Galveston. It might not have been good for the Jack Tar though, because people of significant means no longer came.

“Part of the formula for the Jack Tar was having those well-heeled guests. A different clientele started to come and it was not good for the hotel’s future,” Carwile explains. Over the years there were a number of further additions to the hotel. “They were not as opulent as they’d been,” he says. “The idea was to add more rooms, making it more dense and provide more access for people. The downside was that as more people came, there was a loss of that sense of exclusivity. It was too crowded." "With Leach’s retirement the hotel lost its most vocal advocate. For fourteen years, the Jack Tar Hotel had been a destination in Galveston. The loss of exclusivity, the sale and resale of the Galveston facility, and numerous hurricanes all played a part in the downfall of the hotel as much as losing Leach as the manager. He was a big, friendly man and he was the lynchpin of the organization. Things began to go downhill for the Jack Tar.” After Ed Leach’s departure in 1968, Ed Sammons purchased the property. Where Leach had been an extroverted, outgoing man, Sammons’ shy nature was not what guests were accustomed to or expected. Sammons was never involved in the day-to-day operations of the hotel in Galveston, either, choosing instead to remain in Dallas. Renovations and updates to the hotel all but ceased. Finally, after changing hands several times, the hotel was purchased in 1983 by Roberto Lee, who ran into financial problems and tried to sell the hotel again. “He purchased a lot of insurance, and tried to have the hotel burned down,” said Carwile. “There was an investigation and it was discovered that Lee had plotted an arson to collect the insurance money. He was eventually convicted of conspiracy to commit arson and mail fraud in 1989. The city wanted it razed because it was an eyesore, and so it was demolished in 1988.” It was the end of an era in Galveston. Sadly, those golden days of Hollywood have also passed. Rita Hayworth’s star dimmed decades ago, and Esther Williams and her elaborate synchronized dives are a distant memory. Carwile says that the Jack Tar was a beautiful emblem of the time. “This pool and terrace took on a significant presence,” he said. "This pool was larger than life. Most hotel pools were plain and sedate in comparison with the exception of some in Las Vegas or perhaps at the Fontainebleau Hotel in Miami Beach. The pool at the Jack Tar pre-dates those. That’s what makes it so extraordinary.”

Galveston residents who remember the Jack Tar Hotel say that it truly had the character fit for a tropical island. Life at the hotel represented a simpler time when the pain and strife of the war began to pass, and family life could center around lounging on a terrace among the perfectly landscaped flowers while dreaming of movie stars like Esther Williams leaping to a beautiful swan dive into the pool.