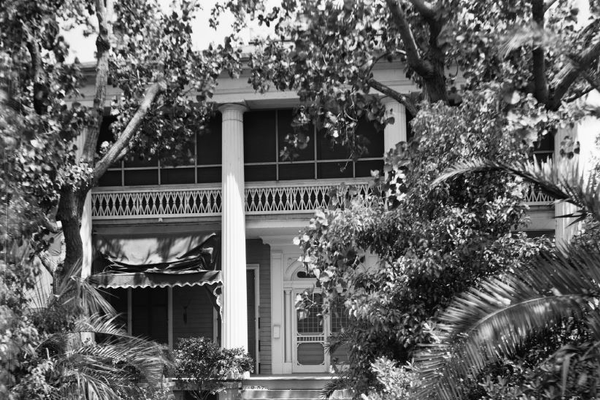 Galveston’s private Artillery Club rests on the site of one of the Island’s most beloved mansions from the past. Referred to by the Library of Congress as the Brown-Denson-Moore House, the architectural gem housed even more families and stories than the title suggests.

Guy Morrison Bryan, the illustrious nephew of Stephen F. Austin and former member of the U.S. House of Representatives, purchased the property in 1860 from J. Brown to build a home near local family members that included the Ballinger family. Originally a 10-acre tract, the lot extended from 31st to 32nd Streets, between Avenues N and O.

The two story, Greek Revival style home was constructed of long-leaf yellow pine from Louisiana. Its old Southern style appearance with tall columns, broad galleries, and tetrastyle hipped roof was considered one of the most beautiful designs on the Island for generations. Visitors often admired the craftsmanship of the delicately railed second floor balustrade and elliptical fanlight over the front door.

The house was deeply set back in generous, well-kept lawns and surrounded by lush plantings, including imposing oak trees from which the home obtained its name “Oakleigh.” Inside, the walls and ceilings of broad halls and spacious rooms were covered in highly polished natural woods.

Guy and his wife Laura Jack Bryan lived in the spacious residence until business during the Civil War required their presence in other locations. Though they returned immediately after the war, Bryan moved his ranch to the mainland in 1867 and rented out the house.

In November 1871, he moved back to his Island home with his young family. Laura gave birth to their youngest son in the house on New Year’s Day 1872 but passed away from heart complications hours later. Heart-broken, Bryan and his five children moved in with his brother-in-law Judge Ballinger and sold Oakleigh.

Pioneer Galveston businessman Henry Martyn Trueheart, Sr. purchased the large home for his growing family. He also leased the adjoining property west to 33rd Street and maintained an orchard with many varieties of fruit and nut trees and planted an avenue of pines.

He was listed as living at this address on the 1880 census with his wife Annie VanMeter Cunningham Trueheart, three of their children, and four live-in servants. During their years spent in the home they added three more children to their family.

In 1886, the Truehearts moved into a grand new mansion on Broadway designed specifically for them. (Details about this home were featured in the February 2019 issue of Galveston Monthly.) Trueheart sold Oakleigh to William B. Denson, a local attorney with offices at 2205 Strand. It was during the twelve years he resided there with his wife Mary and two daughters that the house became known as the “Old Denson Home.” A respected lawyer, Denson was also active in the community, served on the school board, and was a deacon at the First Baptist Church.

The most lively and social years of Oakleigh’s existence undeniably began in 1898 when it was purchased by Thomas Jared Groce, a banker and descendant of a highly respected Texas pioneer family. He and his wife Clifford Loverin Groce were renowned for their lavish yet light-hearted parties that were thrown year-round.

Entertaining became a way of life at the large home, which provided ample space for the Groce’s large guest lists. In addition to friends and family, they often entertained visiting dignitaries and servicemen from various countries.

At the time of the 1900 Storm, the couple lived at Oakleigh with their daughter Patience, sons Benton and Browning, and five live-in servants. No mention was made in the local papers of any damage to the large wooden structure, but Groce actively served on several committees to revitalize Galveston after the tragic disaster.

In 1905, the Groces were back to their tradition of sharing celebrations with friends and hosted their own 25th anniversary party with over 500 guests. In keeping with the family’s love of music, the theme was a garden musicale. Local musicians were hired, and strains of music floated out into the gardens through tall, French walk-through windows that were left open during the party.

A pianist performed in the drawing room; bridge, jigsaw puzzles, and assorted games were enjoyed in the library. A minstrel orchestra played in the hall to provide music for dancing, and the gardens provided moonlight strolls to enjoy the flowers. Professor Conway Shaw’s orchestra played outside on the grounds, where a pergola with wisteria entwined columns, a rose garden with antique sun dial, and beds of dahlias created an enchanting backdrop for the gathering. 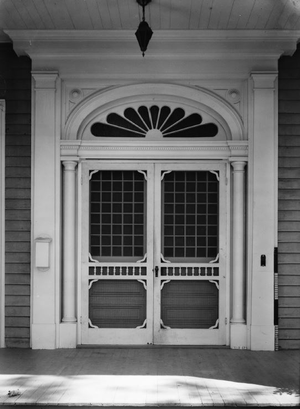 In 1911, Galveston National Bank, which Groce had successfully led for years, merged with City National Bank owned by the Moody family. The banker was intensely worried that this merger would lead to litigation and the loss of a large deal of his own money.

T. J. Groce died of a cerebral hemorrhage on August 2, the day before an ad ran in the local newspapers announcing the consolidation of the banks, with his son Browning’s name signed as Vice-President of the former institution. Distraught at the loss of his father, Browning committed suicide the next day at his home at 1501 31st Street. The Harvard graduate had only been married two years.

Over the course of the following year, a trial was held concerning actions taken by the elder Groce two days before his death that resulted in the movement of the bank’s funds. A letter handwritten by the former banker was found and utilized to clarify and settle the case. Despite the chaos of her surroundings, Mrs. Groce continued to receive visitors on “Visiting Thursday” at her home, but the days of extravagant parties were gone.

She was an active member of the music committee at Trinity Episcopal Church and was involved in the decision to purchase a $10,000 organ for the church in 1912. The Groce’s son Benton died of typhoid fever two years later. After so much tragedy, Clifford and her daughter Patience moved to California where they spent the rest of their lives. 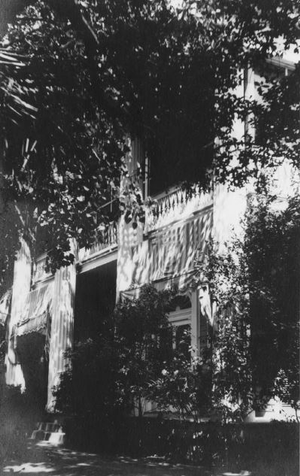 Bartlett Doe Moore, President of Moore Lumber Company and Texas Nail and Wire Manufacturing, purchased Oakleigh from Groce’s widow in April 1914 for $22,500. Moore’s wife Frances was a member of the Hutchings family. The couple lived in the home with their four children, Frances’ mother and sister, one servant, and a black cocker spaniel named Skipper.

Luckily for natives and visitors, during the years in which the home was occupied by the Moore family, this beautiful residence was featured on numerous homes tours, including one during the Oleander Fete in 1940.

The house remained in the Moore family until several years after Bartlett’s death in 1943. The Moore children had married, except for their middle son who died during World War II the year following his father’s death. At some point during the Moore ownership, screens were installed between the columns to enclose its porches. When Frances Moore decided it was time to move into a smaller home, the era of Southern graciousness on the corner of Avenue O and 33rd had ended. 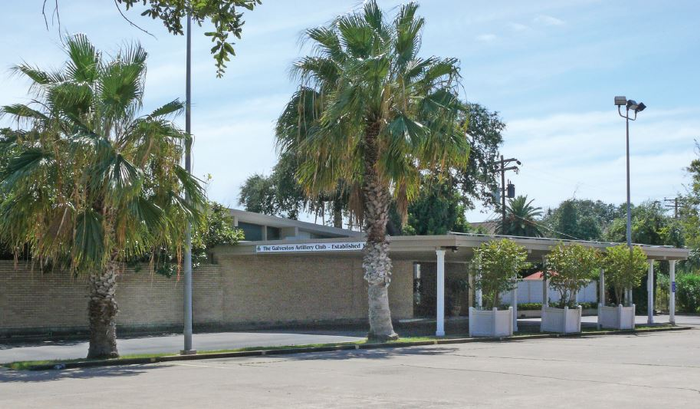 Having historic landmark status unfortunately could not save Oakleigh from the wrecking ball. Demolition of the stately mansion began in May 1957 to make way for a new clubhouse for the Galveston Artillery Club. The new building was erected among an existing grove of trees, and two rare palms were relocated on the property to make room for a swimming pool. Because of this approach during construction, the lot still maintains its seclusion from view thanks to the dense plantings that were initiated years ago.

Though Oakleigh is only a memory, current members of the Artillery now stroll the grounds beside trees that sheltered parties during the Victorian era.